The Rise of Creator-Led Live Shopping

When you hear the term “live shopping,” your mind may wander to QVC network, a free-to-air shopping channel occasionally found droning in the background of a dentist's office or at the house of a grandparent who thinks HBO Max is the name of a healthcare plan.

But live shopping has come a long way since the days of televised commerce. 📺

Through the rise of social media, ecommerce, and the creator economy, consumers are now more comfortable shopping directly from their devices than ever.

Live shopping, or the showcasing of products over social media or another video platform in real-time, unlocks new ways for brands to connect personally with their target audience. This leads to increased sales and decreasing customer acquisition costs and sales cycles, all while creating memorable customer experiences.

And there’s still limitless white space. In 2022, U.S. livestream  ecommerce sales were estimated at $17B and are expected to nearly triple by 2026.

But despite thriving in other countries, western adoption has been weaker than expected. Some of the biggest players in the space already have their share of challenges:

At the core of commerce is trust, and who better to trust than the creators who have built tight-knit communities themselves?

Live shopping recreates the feeling of a friend walking you through their closet or raving over their new life-changing purchase.

With creator-led live shopping segments, engagement is mutually beneficial. To authentically sell to their customers, Goliath needs David. And for the platform and opportunity, David needs Goliath.

When executed correctly, the brand and creator will be exposed to new audiences and benefit from increased revenue and engagement.

A top Chinese influencer sold $1.9B of goods in a single day in a 12-hour live shopping marathon while driving a record-breaking 250M users to Alibaba’s Taobao online marketplace.

Clearly, when the flywheel spins. It spins.

In the wake of past challenges, brands and platforms alike are using live shopping as a test-and-learn opportunity rather than committing large budgets to it as the future of retail. Still, the early success remains promising.

Here are some brands already crushing in the live shopping space:

👟 Worldwide shoe and accessories chain, Aldo, partnered with TikToker Nate Wyatt and celeb stylist Mimi Cuttrell to bring 17,000 eyes to its pilot live shopping stream over five days. In an industry that struggles to compete for mere seconds of a consumer’s day, Aldo achieved an average viewing time of over 12 minutes.

🩲 Knix created its own live shopping secret sauce by combining social media strategies, brand story, user engagement through polls and interactive features, and influencer relationships. All were integrated into a live shopping swimwear launch using Livescale, resulting in well over the Livescale average conversion rate of 9.5%.

⚓️ Three Ships Beauty garnered over 1,600 unique views and a conversion rate of 22.8% during a 45-minute live-shopping pre-launch initiative for a new product.

Have you tried live shopping with your brand? We’d love to hear about your experience. 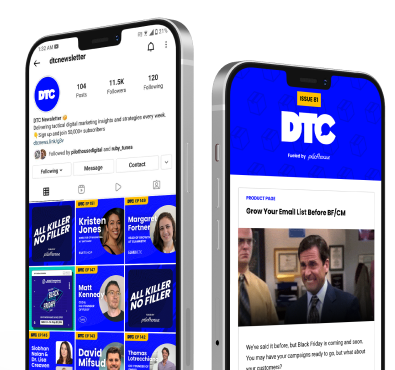 Become the smartest marketer in the room.

By signing up you agree to our terms of use

Your Cheatsheet for Holiday Email Campaigns

We’ve talked about gifting, but we haven't ventured into gifting through darkposted ads.

🎶 Say What You Need to Say

The Rise of Creator-Led Live Shopping

How to Refresh and Recycle Old Creative Using CGC

Five Reasons Why Direct Mail is the Comeback King of 2022